Shadows of the Trinity in the Old Testament 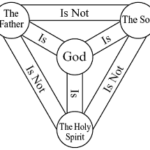 Is that great doctrine of the Trinity only found in the New Testament and the creeds of the early church? Let us take a moment to examine the Old Testament for shadows and hints to the multipersonal nature of the one being of the God in the Hebrew Scriptures. Interestingly enough beginning in the very first chapter of Genesis we start to see signs of this.

If the first verse of the Bible it says “In the beginning, God created the heavens and the earth.” The word translated into English here as “God” is the Hebrew word “elohiym” (אֱלֹהִים). The word “elohiym” is the generic word in Hebrew for “god” and it is a masculine plural noun. It is used in Hebrew in much the same way as the word “god” is used in English. It can be used to represent the one and true “God” or it can also be used to refer to a false “god”. It’s usage is determined by it’s context in exactly the same way we use the word “god” in English. The thing that is interesting is the word “elohiym” here is the plural form of the masculine singuar noun “elowahh” (אֱלוֹהַּ). This is because the noun “elohiym” ends in the letters “Yod” and “Mem” (י and ם). The letters “Yod” and “Mem” ending a word make singular masculine nouns plural in the same way as “s” and “es” make singular nouns plural in English. The singular noun form of “”elowahh” is used in poetry and in later Hebrew (i.e. Deut 32:15,17) but most of the time the plural form “elohiym” is used when referring to “God”. This is interesting because the very first verse of the Bible already hints at a plurality.

In the very next verse (Gen 1:2) we see that the “Spirit of God” hovering over the face of the waters. This is our first hint of the deity of the Holy Spirit in the Old Testament. We do not clearly see the Spirit of God as a distinct person from the Father and the Son till the New Testament but the revelation here in the second verse of the Bible is consistent with the New Testament’s testimony of the Holy Spirit.

In Genesis 1:26-27 when God was speaking about making man he uses three first person plural pronouns. “Let us make man in our image, after our likeness” In the very next verse however when the action of creating man is being accomplished the text switches back to using three first person singular pronouns “So God created man in his own image,
in the image of God he created him; male and female he created them.” The action of creating indicates the single being of God and the union of the will of the Godhead in the act of creating.

In Exodus 19:24 we see another example of where God (YHWH) is speaking and he refers to actions being done by the LORD in the third person. “And the LORD said to him, “Go down, and come up bringing Aaron with you. But do not let the priests and the people break through to come up to the LORD, lest he break out against them.”

In the Shema itself, which every Jewish child has memorized from a young age, there is a hint to the tri-personal being of God. The Shema is the clear statement that Jews and Christians are monotheists. Within the Shema we have three referenced as being one. “Hear, O Israel: The Lord our God, the Lord is one.” Within the very text that unitarians quote all the time to deny the Trinity there is a hint to three in the Godhead. The interesting thing is that we as Trinitarian Christians quote Deut 6:4 all the time as well to demonstrate our belief that there is only one God. The Shema does not deny the doctrine of the Trinity it only confirms it further.

In Isaiah’s vision of the LORD in the temple the seraphim were calling out Holy, Holy, Holy is the LORD of hosts. (And one called to another and said: “Holy, holy, holy is the Lord of hosts; the whole earth is full of his glory!”) The repetition of the word “Holy” has significance to us now in the New Testament when we now have further revelation that tells us that God is three in person. We also see the three uses of “Holy” in in the New Testament in Revelation 4:8.

In Isaiah 48:16 we see the LORD again speaking in the first person and then refer to the LORD God as sending him and his Spirit. (Draw near to me, hear this: from the beginning I have not spoken in secret, from the time it came to be I have been there.” And now the Lord God has sent me, and his Spirit.) We can see all three members of the Trinity here, Father, Son and Spirit. The Son is the one sent by the LORD God (Father) and the Father also sends the Spirit.

Psalm 2 is a very interesting passage of Scripture. It appears to be a dialogue between three individuals. It is a passage that is quoted numerous times in the New Testament as being messianic. I will highlight with color where it seems to be the different persons of the Trinity speaking to one another.

1 Why do the nations rage
and the peoples plot in vain?
2 The kings of the earth set themselves,
and the rulers take counsel together,
against the Lord and against his Anointed, saying,
3 “Let us burst their bonds apart
and cast away their cords from us.”
4 He who sits in the heavens laughs;
the Lord holds them in derision.
5 Then he will speak to them in his wrath,
and terrify them in his fury, saying,
6 “As for me, I have set my King
on Zion, my holy hill.”
7 I will tell of the decree:
The Lord said to me, “You are my Son;
today I have begotten you.
8 Ask of me, and I will make the nations your heritage,
and the ends of the earth your possession.
9 You shall break them with a rod of iron
and dash them in pieces like a potter’s vessel.”
10 Now therefore, O kings, be wise;
be warned, O rulers of the earth.
11 Serve the Lord with fear,
and rejoice with trembling.
12 Kiss the Son,
lest he be angry, and you perish in the way,
for his wrath is quickly kindled.
Blessed are all who take refuge in him.

There are many other passages in the Old Testament that could be used. These are a small sampling of the types and shadows that point to the deity of Christ and the triune nature of God.